I had a very eventful weekend. It was filled with twists, turns & surprises on every single corner. I learned a lot about myself this weekend and talked the most I have in months, maybe years. I become closer with my parents and enjoyed myself.

In February, Nicole Rogers contacted me via Twitter after I wrote up I Just Want A Full-Time Job on Buster & Ellie. She mentioned me in her tweet saying, “Hi, I loved this post and would like to speak to Hope about a TV doc re millennials. Can you plez let her know?” Allie, my editor-in-chief, let me know and I sent Nicole a DM and then set-up a Skype date. We chatted via Skype about my job search, living situation, boyfriend and where the hell I was going in my life. She liked me so much that she forwarded me along to her Director, Maureen. Maureen and I chatted via Skype because she lived in Canada. Over the next few months, we’d Skype from time-to-time and I was asked to produce video diaries. I did everything asked of me.

Honestly, I didn’t think much of it. I’d do a video diary once in a while explaining what was going on in my life, whether it was good or bad. Most of it was bad though. I was uncertain about my job & life in general. I always thought ahead, but it never mattered because nothing could have prepared me for the life I’m living. NOT liking my job, living situation or knowing exactly who I am. I’m sad, disgusting & gross. To not know who you are at 25 is ABSOLUTELY scary & frightening. We’re all in the same position, 20-somethings.

At the beginning of October, Maureen & I spoke again and she told me she was interested in coming to PA. She pitched October 31st-November 2nd. I couldn’t believe it though. I did not think she would actually come. I sort of pushed it to the back of my mind and didn’t re-live it until she asked if I could get permission from Brett & my family to film at our house and them. So, I talked it over with everyone, but they didn’t get it. They never understood, but did say YES. It’s a documentary called My Millennial Life.

The description reads: This project will look at a few individuals as they live their lives and look to their futures while they navigate entering the workforce during a time in which the employment landscape can be very uncertain. The documentary will explore the attitudes, relationships, dreams, obstacles and difficulties of the millennial generation.

Okay! I spoke with my work as well because they were filming there as well. A cameraman, sound guy, Maureen & her co-pilot, Andrew would arrive on Friday, OCTOBER 31ST around 4:30 and film me for an hour, head to my house to film family dinner and chat with my family in general. Saturday– we’d go to Village of Pennbrook apartment, Starbucks, speak with Brett and have a conversation with my parents about me possibly living with Brett. Sunday– an intense interview with me & only me then head to NYC before they head back to Ontario, Canada. It was set. I was stoked, thrilled & excited about it.

They arrived this past Friday and I could not wait. I was to be filmed and I was a bit nervous. I made my phone calls at work & did what I had to while they filmed me. I felt strange being on camera, but by Sunday, I was used to having a camera in my face.

(FRIDAY: This was the first day of filming)

I was being followed and was not used to having a camera around while I spoke about my hopes, dreams, wishes, fears, etc. Well, that was the first day atleast. On Saturday, I was more used to it. I loved it. It was tiring and exhausting. I had to constantly talk about my life. I do not like the place I’m at as of right now and constantly talking about it made me sad, but I knew I wanted to do this documentary and I don’t regret one second of it. I worked with an amazing group and they are coming back to film me more than once.

(THE CREW: Left to Right– ANDREW; JEREMY; ME; DANIEL; MAUREEN)

I’d tell you one of the most disheartening events that took place this weekend was going to the apartment. Brett’s job is on the rocks and unfortunately, we must go this week and get our deposit back. Will I be able to handle that? I’ll get back to you on that one!

Yesterday, it was rainy, cold and wet and we headed to our apartment. We were able to take a tour inside as well. K. Can I tell you know sad I was?  I had to walk around this almost-apartment we would have had if him & I had stable jobs. We don’t. He’s not anymore stable than I am. I’m lost, uncertain & absolutely depressed. I spoke more & more about my situation. Maureen turns to me and asks, so how do you feel? Nope, I wasn’t going to lie or sugarcoat it. Instead, I divulged how I truly felt. Disappointed. Utterly & Extremely Disappointed. Brett keeps telling me not to dwell on it and is being very much positive about it (surprise surprise actually!)

Brett came over yesterday and he was MIC-ed & asked plenty of questions. On Friday, I was MIC-ed for the first time and I felt special. My mom was MIC-ed as well and later on, my dad.

Then, my parents & I had a conversation about me possibly moving in with Brett & his parents. My mom & dad don’t agree because they don’t think it makes sense moving into another house. I get that. I respect their opinion and take it into consideration, but ultimately, it’s up to me and we spoke about this on camera. Part of me wants to, but the other doesn’t. Firstly, we’d be buying our own groceries, doing our own laundry and making our own dinner. We were set to live out on our own anyway. This is practice before we officially move out. We’re half-moved out. I want to do it though.

Anyway, NYC was so freekin awesome though! We went to the Hearst Tower to check out where my Good Housekeeping internship was January 2013! Um. It all came back to me. The train ride. The walk. The subway. The buildings. Everything. I felt it. I smelled it. I heard it. It was also snowing too, which was so freekin awesome!

Then, we got lunch at the Brooklyn Diner near the Hearst Tower. It was yummy. Jeremy, Daniel, Maureen & I all ate our lunch, but had to rush a bit because we wanted to go on the Double Decker bus to take some overhead shots.

This weekend was THE MOST I’ve talked in a very, very long time. We looked through my diaries & clothes. We spoke about ALL the emotions and thoughts going through my mind. People wanted to be filmed along with me. Others jumped in the shot in NYC & Starbucks. In a few months, when they come back, we’re visiting Temple! I’m so stoked, excited & thrilled for them to come back! 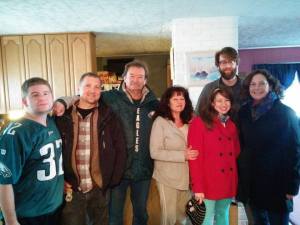 (Gotta end it with a #Selfie)

SEE YOU ALL SOOOON!

One thought on “My Millennial Life: DOCUMENTARY I WAS CHOSEN FOR”

Simply Real Formerly My Life As A 20-Something Year Old

Simply Real Formerly My Life As A 20-Something Year Old